The Media Controls Your Mind!

What we watch on television everyday affects us in ways we cannot even imagine. In fact, it would be good to add the internet and films/movies as media along with television as well. So, do media really affect us and our behaviors? 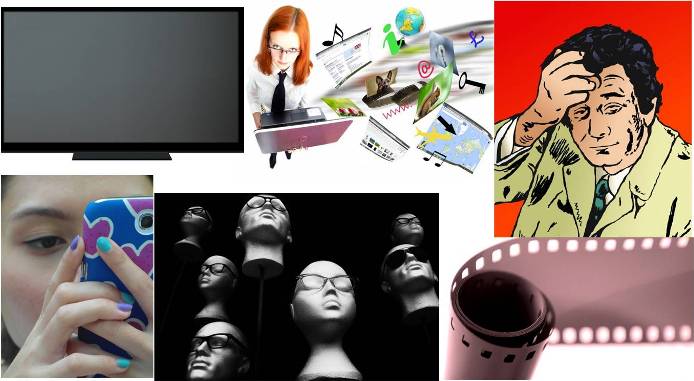 And it is the sub-conscious mind that affects our behavior patterns and overall though processes. As I describe certain examples you can think about how the two minds are being affected in each case.

I have noticed of late that the younger generations are suffering from short attention spans. There is always a need to change the status quo every few minutes if not seconds! For example, if I am reading a book, I may feel the urge to check my phone once in a while in between my reading. That shows that I am unable to concentrate on one single activity for a longer span of time.

I watch people travelling - in buses and cars - and notice that they have their earphones plugged into the ears and their eyes on the screen of their phone, and a constant movement of fingers. So there is music playing in the background and chatting on whatsapp and updating statuses on facebook, and checking that latest dress design in the shopping application. The list may just be endless.

Television and its effects are hardly noticed by people. The news channels are constantly trying to mould the minds of people through their under-the-table deals with certain powerful people from the field of politics and business. The nexus is way beyond the understanding of the common man. What are the ways television influences us? Let us see.

The easiest aspect to understand is advertising. One of the methods is repetitive advertising. The more we see a product and it's so called "benefits" advertised the more we are likely to have an urge to buy that product. There are certain companies which take the unethical route of using children in their advertisements. When a child watches an advert and sees another child using a certain toothpaste, they demand it from their parents. I have even seen children being shown travelling by a particular car to school - imagine what a child watching that advert would want from their parents! If you are having a strong urge to buy a product, chances are high you have been influenced by advertising! You may say you are not influenced by the deodorant adverts on television showing how a man attracts a lot of women by using those deodorants, but let me assure you there is an influence in your sub-conscious mind. Do we really buy because we need it, or because of peer pressure/social influence created by advertising?

Television channels provide entertainment genres - but most programs show a lot of conflict, violence and sexual content. Look at how channels watched by young people are filled with programs showing these kind of content. Even cartoons for kids are not spared. There are sexual innuendos, violence and revenge and religion themes.

The news channels are no wonder referred many a times as "paid media." It is but natural as there are many such cases that have come up in the recent past. Be it Rupert Murdoch in the UK and USA or the Indian television news channels. Any person with common sense can watch news channels and understand which way they tilt! News channels have become the best source of marketing for politicians with great ambitions as well as for businessmen who want to portray their companies in good light.

Films and film-makers have become equally irresponsible in their approach to film-making. Women in Indian films are mostly shown as nothing more than commodities. Men are still the macho patriarchal heroes who save the women, while women are supposed to wear clothes and a personality to attract the hero. That also applies to vamps and villains. This leads to affect the minds of young men and women in striving to become the kind of characters and their traits they see in the films. May not seem logical at first thought, but once you understand how it affects the sub-conscious mind you would know what harm these films do to us.

Every day we are constantly fed with numerous psychological level messages, and media has taken over the lives of people. But is it all that bad? My answer is no. There are still programs on television that inspire us and help us learn, there are a few films which help us with perspectives and knowledge. The social media can be a good way to connect with people.

The truth that hits us is the fact that the percentage of programs and films which have a negative influence far outweigh the good ones. The social media is creating more addiction than positive influences.

The only way to move out of the fear psychosis and negative effects created by the media is to be more aware and have more self-control. If I am to choose to spend lesser time with newspapers, television and social media, and spend more time with real people around me and see real places and have real experiences, I would be a person who would be less likely to be controlled by the media.
Posted by Coach Zubin at 12:31 No comments:

From Thinking Big to Big Action

Success is not only about thinking big. It's also about big action.

The greatest drawback that I have witnessed in people is not a lack of ability or thinking, but the discipline to take action. While there are many who want to do a lot, and also have brilliant ideas on what and how, there are only a few who take the right steps, focus on the goals, work hard and make things happen.

Entrepreneurship has taught me this valuable lesson on success. The old fashioned hard work has no substitutes. Use technology, become innovative, get smart people, but all that would be of no use without dedicated action. 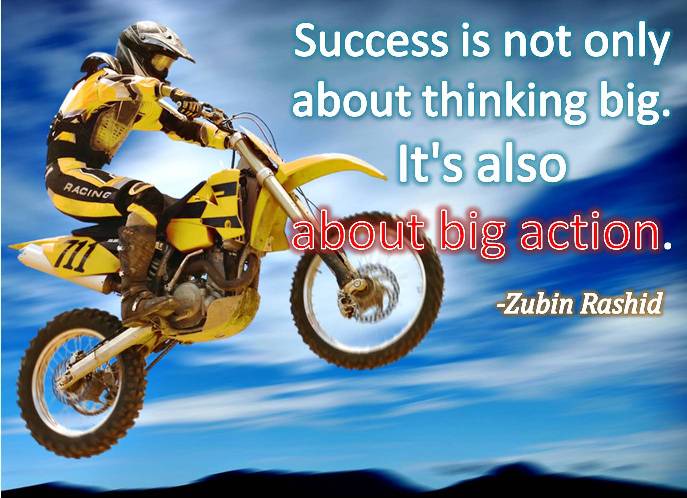 Today my role as a strategist in my company doesn't take away the element of hard work. Every minute of thinking about the steps for the company is followed by some non-strategic tasks as well. Both involve complete focus and presence of mind. Handling situations on a daily basis, making sure everyone is on track, trying to convince people that work requires a lot of persistence and effort, all this takes a lot out of me.

After every planning meeting is created a list of actionable items. Are these tasks delegated to the right people, are they handling them well, are they completing the tasks on time? There is so much more than to simply create a list and then not doing the tasks on time. That would be a complete mockery of the time spent in planning as well!

Success at work is not everyone's cup of tea, and entrepreneurship is an even bigger challenge. You have your cup, what you pour into it is up to you. And what you pour in it is what you will taste - either a distasteful failure of all ingredients or a beautiful blend of aromatic success!
Posted by Coach Zubin at 12:18 No comments: